When I was 12 years old I planned for a space program plan of a kid that is taking card Board box, straws, rockets and a small container. My plan which will be comedy today when you read this, took the card board box fitted wings on both sides, and some rockets behind and for respiration in space I kept the container (Milk container) and kept it open for two days thinking that the container when closed with card board and planting a straw will hold the two days oxygen that I can use in space. I am not aware of the gravity or how much pressure is needed to take off or any other basic information of rocket science, only the desire to reach space. The plan did not take off.

In my schooling years I was weak in Mathematics and my dream as an Astronaut ended. But I am still fascinated by the word space, rockets and astronauts. I never miss any programs related to space in TVs and as well as in movies.

Recently when I was searching the net I came to know about a person and his son sending a Home made spacecraft fitted with iphone and HD camera and reached the space and back home. All this can be done within a budget of $500! was incredible. I feel that this kind of experiment will be done by many enthusiasts in future. We will witness many wonders soon.

Here is the extract from the You Tube site:

Video from a camera attached to a weather balloon that rose into the upper stratosphere and recorded the blackness of space. Seven-year-old Max Geissbuhler and his dad Luke Geissbuhler dreamed of visiting space. Armed with just a weather balloon, a video camera, and an iPhone, they basically did just that.

The father-and-son team from Brooklyn managed to send their homemade spacecraft up nearly 19 miles, high into the stratosphere, bringing back perhaps the most impressive amateur space footage ever. The duo housed the video camera, iPhone, and GPS equipment in a specially designed insulated casing, along with some hand-warmers and a note from Max requesting its safe return from whomever may find it after making it back to solid ground. All told, father and son spent eight months preparing for their homemade journey into space, in hopes of filming "the blackness beyond our earth."

Then, one day in August, Max, his father, and his friend Miles Horner headed out to a nearby park to see their dreams realized. After attaching their equipment to a 19-inch weather balloon and switching on the camera, they watched as their simple craft disappeared high into the sky.

"In August 2010, we set out to send a camera to space. The mission was to attach an HD video camera to a weather balloon and send it up into the upper stratosphere to film the blackness beyond our earth. Eventually, the balloon will grow from lack of atmospheric pressure, burst, and begin to fall.

"It would have to survive 100 mph winds, temperatures of 60 degrees below zero, speeds of over 150 mph, and the high risk of a water landing. To retrieve the craft, it would need to deploy a parachute, descend through the clouds and transmit a GPS coordinate to a cell phone tower. Then we have to find it.

"Needless to say, there are a lot of variables to overcome"

After a little over an hour, the craft reached the stratosphere, 100 thousand feet overhead, and captured some incredible footage of space before the balloon popped and fell back towards earth. They found their spacecraft 25 miles away from where they had let it go -- stuck up in a tree.

Although the camera's battery died some minutes before touching down, the footage the camera returned is impressive. And despite the fact that the craft didn't technically reach the boundaries of space, Max and his father are undoubtedly proud of their accomplishment.

Just as the space-race of the 1960s was driven by a spirit of exploration and ingenuity, so too was the bold idea of Max and Luke Geissbuhler to film the darkness beyond our planet with their homemade spacecraft. And just as mankind was at once emboldened by the success of science and the realm of possibility was widened for an entire generation -- perhaps this father-and-son team can inspire others to follow their dreams, too, do-it-yourself style. 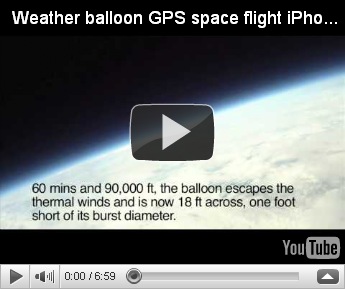