Today the entire world is mourning for the death of Neil Armstrong. It is a great loss for humankind.
When he landed on the Moon, on July 20, 1969, he said, “That’s one small step for man, one giant leap for mankind”.  He was born on August 5, 1930 near Wapakoneta, Ohio. His Apollo 11 Mission to Moon was criticized as a hoax. But in an interview, Armstrong said, “It was never a concern to me, because I know that one day, some body’s going to go fly back up there and pick up the camera I left. So then they’ll be sure”.
Posted by Murali No comments:
Email ThisBlogThis!Share to TwitterShare to FacebookShare to Pinterest
Labels: Apollo 11 Mission, Neil Armstrong 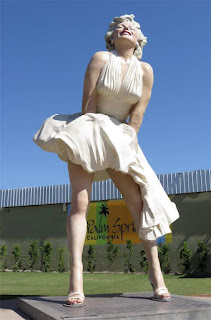 Marilyn Monroe was found dead in her Brentwood home on Aug. 5, 1962. She was 36 years old. Her death launched dozens of rumors and conspiracy theories.  It is hard to believe that she would be 86 years old today if she lived. For the most devoted fans of the late screen siren, she will forever be that 1950s version of Marilyn – platinum, giggling and playful. It is that Marilyn that fans will remember with several events marking the run-up to the half-century mark of her death.