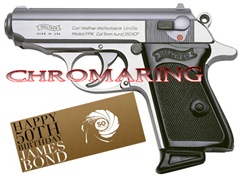 The first Bond movie I watched is Never Say Never Again when I was 10 years old with my father. I was not at all interested about Bond at that time. In 1988 I read a novel Live and Let Die and was very much impressed by the style and narration and wanted to see that movie, but it did not happened soon, the next Bond movie I watched was Octopussy in 1989 followed by For Your Eyes only, The spy who loved me, Diamonds are forever, View to a Kill, The Man with the Golden Gun, Moonraker and finally Live and Let Die.

When Living Daylights was released I was disappointed that Timothy Dalton is not perfect for James Bond. In 1992 I happened to see Remington Steele a television series telecasted by Star TV, played by Pierce Brosnan and I thought why can’t he act as Bond.

After some years Golden Eye was released and found that Pierce Brosnan as my Bond. I loved his style he is very charismatic and perfect fit for Bond after Sean Connery. I feel that the most fitting role for Bond is done by Sean Connery his style is excellent and the dialogue delivery is awesome.

Some important Bond Quotes that I loved:
Shaken not stirred.
My name is Bond, James Bond
So you live to die another day
I travel a lot, sort of licensed trouble shooter.


This month Bond No.23 Sky fall will be released. Hoping it will be better than Casino Royale and Quantum of Solace.
Posted by Roop
Email ThisBlogThis!Share to TwitterShare to FacebookShare to Pinterest
Labels: 007, british secret agent, james bond