The author Martin Phillips who had graduated with a double major in History and Archaeology from University of Cambridge had worked as an archaeologist and had acquired the skill from various excavation sites. From the authors own words about the book:

"In this book we're going to take a journey through the ancient civilizations that have passed into the annals of history, sometimes leaving only traces of their once great cultures. From the Ancestral Pueblo Culture in North America to the Khmer Empire in Asia and beyond we will discuss these enthralling peoples, what we know about them and what they left behind".

Below is the list of lost civilizations the author has written about:
1. The Minoans
2. The Mycenaeans
3. The Olmecs
4. The Chavin
5. The Nabataeans
6. The Nazca
7. The Moche
8. The Aksum Kingdom/Empire
9. The Ancestral Pueblo Culture (Anasazi)
10.The Maya
11. The Khmer Empire
12. The Toltec
13. The Aztecs
14. The Inca
15. Lost Cities (Bonus feature)

The author has neatly mentioned each civilization by giving appropriate headings: Introduction, What did they left behind?, Interesting facts, What happened to them?

In bonus chapters the author has given exhaustive details about Baiae. It became famous by Romans for the bathhouses as it is situated near volcanic region. The city was abandoned in 1500 AD (CE) due to epidemic of malaria and the city gradually sunk due to the volcanic exhausts in the area. This information made me curious to know more about this city and searched for the images. The city now is tourist spot one can hire a boat with glass bottom or go for scuba diving to get a first hand experience. 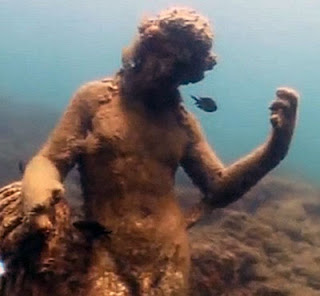 Baiae lies submerged in just a few feet of water, with all streets, imperial luxury villas and statues (image from message to eagle.com)

And finally I will say that this book will help us to get a brief note on some of the worlds lost civilizations how they progressed and in some cases how they declined. I enjoyed reading this book and expect to purchase some of his other books from kindle.