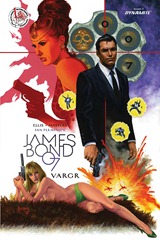 In #2, the Lufthansa flight touches down in Berlin, from Berlin Embassy station Dharma Reach contacts Bond and takes him to her car, with her armoured glove tries to kill Bond. oo7 kicks the driver and makes the car to hit an oncoming truck, the car driver gets hit seriously while she lose her hold. Bond acts as if he taking the gun from his side arm (we know that he was allowed to travel without any fire arms) she gets out of the car and disappears. 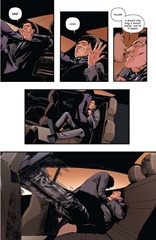 Later Bond walks to the Embassy and he gets a hint from Carney the Station chief about a rich scientist Slaven Kurjak  who works on pharmaceuticals and powered prostheses. His own left hand is an example of his work. He gives the address for garage lab which process c0caine.

While coming out of the Lab, Dharma Reach seen hiding behind a muscular person.