Continuity of the Parks - Review

It is a short story written by Julio Cortázar Descotte, an Argentine Author. The story has three characters one is the reader, second is the man and third the woman. 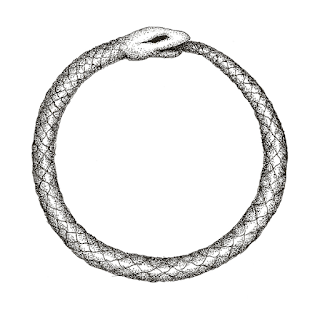 A man (the reader) picks up the novel he had started reading couple of days back. As he is a busy, he finishes all his business matters and settles in his favourite green armchair which faces an oak tree park and he immerse in the novel. The story in the novel, a woman arrives first then a man who is passionate and also emotional comes next to meet her, his face cut by the backlash of a branch. She kisses the blood stained face but he rebuff her caresses and they have lustful panting dialogues. They part ways, the woman going north and the man with a knife going south, he traces the avenue of trees and comes to the house of the woman's husband. As planned he crosses the hall, gets up the stairs, he enters the first room and second room which are empty and finds a door to the salon, he sees her husband reading the novel sitting in the green armchair. The story ends. 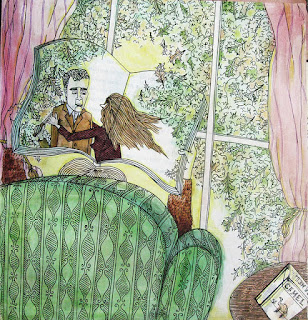 Representation of the short story in image


Above image of uroboros, a snake eating itself, having no beginning and no end, Julio Cortázar has a vivid imagination and wonderful use of words, he masterfully blends the reality and fiction. The reality is the reader, the story in the novel which he reads is fiction and inside the story two fictional characters the man and the woman who plans to kills her husband who is sitting in the green armchair. Amazing talent in using words, the author makes us to miss the significant part of changing the track from reality to fiction.

We imagine that the fictional tale and the reader who is reading the novel are connected as the author has used the green armchair and oak tree park with fictional man possessing a knife coming to murder the person sitting in the green armchair which is overlooking trees.

So beautifully written, on the first read I cannot understand and little bit confused after reading for the second and third time I was able to comprehend the tale.

Posted by Roop
Email ThisBlogThis!Share to TwitterShare to FacebookShare to Pinterest
Labels: continuity of the parks, julio cortazar, short story