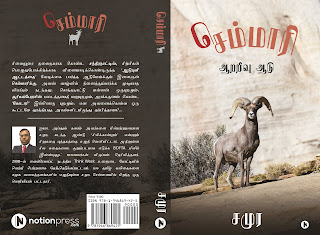 I had won the "Siliconpuram" book giveaway of this author previously and I had reviewed it in goodreads.com. In March I received a message from Samura the author, that I have been sent one paperback copy of Semmaari. I thanked him for his generosity.

One week back I received the copy before its launch date. The cover has the image of a sheep with the title "Semmaari" and a tag line Sheep with sixth sense. I cannot grasp, what connection it holds with a historical fictional story? That was my fault.

The book is 294 pages which can be read in one sitting but it took me 3 days to complete and was awestruck by the plot used by the author. Never before I had come across such a story in Tamil.

The story starts with an old guide Desigar narrating the story to the author and his family. There are two countries one is Suriyanadu and another is Chandranadu. The later is a small kingdom ruled by Puthirasekaran and like his father he is obsessed with architecture, he wanted to create a beauty in stones. He arranges Sadayuthar the chief stone architect and his assistant Nagalan to commence the work. The progress was fast, Sadayuthar men force is supervised by Kodari (Axe) from the name y0u can guess he is one of the adversary of the story. Then comes the hero of the novel "Semmaari" a Shepard and a simpleton from a downtrodden community.

While the architects are free they use to play "Aadu Puli Aatam" (Tiger & Sheep/Lambs and Tigers game) Semmaari wants to learn the game but was ignored due to his community status. He observes the game hiding from a tree. One such day Nagalan feeling lonely and bored asks Semmaari to play with him. He teaches the basics of the game to Semmaari. The game is dominated when played with Tiger piece but Semmaari was most talented when he plays with sheep pieces. Subsequently he meets his love Nathiyazh (Nathi – River, Yazh – stringed musical instrument) (what a lovely name)

As Semmaari is from a nomadic tribe they plan to shift but destiny has another plan. The Tiger and Sheep game becomes a contest between a stranger Guhan and Nagalan. While the contest goes on Nagalan playing with sheep pieces was nearing defeat and he asks someone to fetch Semmaari for assistance. Without the knowledge of the contest Semmaari helps Nagalan to win the game after the game as per the contest rule Guhan's right hand was severed by Kodari. This is the twist of the story as Guhan is none other than the Commander of Suriyanadu.

The next day Sadayuthar congratulates on Semmaari's victory while they were celebrating, Guhan comes back with a mighty army and kills everyone even the sheeps of Semmaari is not spared. Somehow Semmaari and his remaining family members, Nathiyazh and Nagalan escapes from the attack.

When Guhan's plan to arrest Nagalan the architect and his plan to avenge Kodari (for loss of his limb) and Semmaari (defeated in the game and as well his dignity)  fails miserably he asks the King Puthirasekaran to kill Kodari and Semmaari for him. Kodari who stays in a remote cave with his friends, hints upon a plan to kill Semmaari and thereby he might get mercy from his king and Guhan.

Semmaari comes to know that he has been targeted by three opponents King Puthirasekaran, Guhan and Kodari. He was running in despair along with his family and sheeps. He has no weapon to defend suddenly he understands that he is literally playing the Tiger and Sheep game and he uses the game techniques to outwit the three adversaries (3 tigers). How it is done? That shows the unique and intelligent story telling talent of Samura.

The characters are not complex they are simple and very much engaging and we can relate them to our day to day life. Each character has a unique feature and the author has blended them perfectly. Everything he narrates in the story are all related in one way or another.

After the climax the author goes into subtlety like the three different techniques Semmaari uses, the people involved in every plan, the use of five elements etc. are worth mentioning.

I very much enjoyed reading the book and I could have lifted the author if he was present before me.
Posted by Roop
Email ThisBlogThis!Share to TwitterShare to FacebookShare to Pinterest
Labels: historical fiction, semmaari, tamil novel