“Look--down there on the ground! It's a guy, he's kinda ordinary...it's--Clark Kent?! As Metropolis recovers from the devastating attack of Doomsday, the mysterious figure claiming to be Clark Kent takes the spotlight to clear his name and prove once and for all that Clark Kent is not Superman!”

I have to thank Netgalley and DC Entertainment for giving me an opportunity to read this graphic novel.

In Volume 2, the story takes place after the epic battle of Superman with Doomsday. Superman is killed, before that the world comes to know that Clark Kent and Superman are same person. Now Clark Kent with fractured left hand comes to Daily Planet to finish his investigation on Geneticron, later Clark was thrown out of the building and Superman! saves him. Both know they are not who they are. Superman takes Clark to Fortress of Solitude and tests him, the result was unexpected and the mystery deepens.

Superman is seen married to Lois and having a kid named Jon, trying their best to adapt to their new world.

This graphic novel revolves around the lives of Clark Kent and Lois Lane. Lois been dead! and another Lois taking her place and trying to finish the book on Superman. 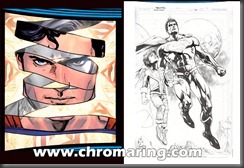 The story is not conclusive but it has its fair share of mystery and twists which will surely engage us. The art work is good, written by Dan Jurgens and pencils by Tom Grummett for That which you manifest is before you, Patch Zircher for Superman meets Clark Kent Part I & II, Stephen Segovia in Lois Lane Back at the Planet Part I & II. Especillay I liked the face of Superman been peeled which I have uploaded above.