I have read your first two novels, The Revelation Room and The Eyes of the Accused. I liked your writing style and your trademark approach in character presentation with a tinge of dark humour. 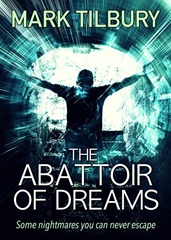 The third book is Abattoir of Dreams which is not Ben Whittle investigation series and I purchased that book. As usual you did not disappoint me. I know how gruesome your villain characters are I cannot forget Edward Ebb from The Revelation Room and not to mention the name since it will be a spoiler “the target” in The Eyes of the accused. I expected such a character in Abattoir of Dreams as the story starts from Michael Tate who is in the hospital undergoing treatment after a failed suicide attempt, suffering from amnesia, paralysis and believed to be Becky Marie Coombs murderer.

Right from the start you made me ponder over the accused character Michael Tate, is he a murderer? is he innocent? Tate tells to the nurse that he can see an emergency door in the wall written with blood red letters, really is he a nut? why no family members visited him? As the story progress I was awestruck with your brilliance of using the characters Detective Inspector Carver and Michael’s friend to twist and mystify the plot further. What a storyline!  what a flow! non stop roller coaster ride.

The story becomes more disturbing when Michael childhood is revealed, how pathetic his life turned into. Of the all the characters you used I liked Liam Truman and the dog Oxo.

I feel little bit ashamed to tell you the truth that after reading some sentimental novel tears may welled up but I have not cried. Mark you made me cry not once, not twice but thrice. I closed my kindle and cried out after reading the chapters on Michael mother’s death, second when he leaves Oxo to Woodside Children’s home and third after the climax.

I like to mention about the use of a ghost in the story and making me think who the ghost should be. This book deserves to be filmed and five star rating is not enough.

If I made to compare the best works from your three books, certainly I will choose this book The Abattoir of Dreams.

Posted by Roop
Email ThisBlogThis!Share to TwitterShare to FacebookShare to Pinterest
Labels: mark tilbury, mystery, the abattoir of dreams, thriller