Mesmerized by the cover of the book I requested for the copy through Net galley. I did not read the blurb. This novel is part one of Airborne trilogy, the story involves the life of three main characters paratrooper Theo Trickey, Medical Officer Captain Daniel Garland and Erwin Rommel (the desert fox). 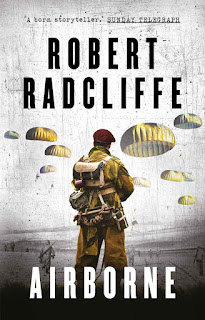 The story starts in Ulm a small city on the Danube where prisoners of war Captain Daniel Garland along with captured 1st airborne Division. There he saves a gravely wounded paratrooper Theo. The story deviates from the battle to the life of Theo's childhood in Bolzano, his British father and South Tyrol mother, their fight against the right for branding them as Italian/German. Theo loses his father early and he is guided by his great grandfather and grandfather. Later Theo moves to England where he gets the chance to learn and sign up for the army and also a chance of meeting with Erwin Rommel who asked him to "make a decision" the words often popped out to Theo whenever he was confused, one for his ethnicity who he had to fight against, second for choosing as a paratrooper and thirdly almost working as a spy for England. His stint in army was first a failure until someone gives another chance to become a paratrooper. His success in damaging Trargino Aqueduct and getting the confidence from a group who have no command structure, no organization no relevant skills or weapons, fighting against Mussolini. 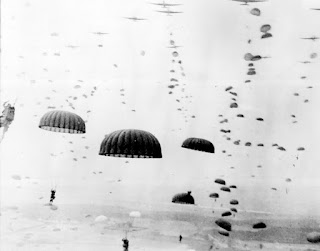 Subsequently the author narrates the story from Garland point of view, a medical officer who entered the war voluntarily, his visions of the war and his service to the patients which are beautifully narrated for instance how Garland coped with stench of cordite, blood, suppuration and smell of sewage and never ending procession of incoming stretchers with mutilated soldiers. How he looked the war torn places, from his own words, onslaught of artillery bombardment, passing through damaged buildings having few windows, roofless buildings, showing gaping holes buildings consumed by raging fire, streets littered with wreckage and debris, burned out army vehicles, fallen telegraph poles, smashed trees, shell craters, mounds of rubble on the streets, aptly showed the desolation of the war. Like his colleagues he was expecting the victorious entry of 30 Corps for their salvation but 30 Corps was unable to advance north, Dreadfully injured Theo is unconscious but his will power drives him to be alive. While treating in Stalag XI-B, Garland is transferred to Stalag 357 where he enjoys some freedom. 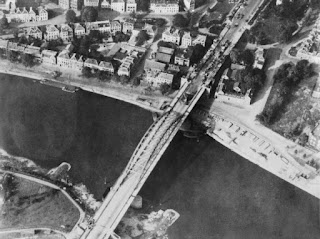 Aerial view of the bridge over the Neder Rijn, Arnhem (Image source Wikipedia)

The story ends when Garland preparing to escape from Stalag 357 and Erwin Rommel in Africa.

The book is around 300 pages, fast paced and I enjoyed thoroughly reading this novel and I anxiously waiting for the second part. Fans who are interested in Second World War will surely like this novel. While reading this book I ordered a paperback of Robert Radcliffe's Under An English Heaven.