Columbus William McIntyre a special prosecutor in Junction city, son of a murdered cop who plans for running Shale county primary election for District Attorney, on one fateful day he gets a call from his friend Rick Van Pelt a detective at the Junction City Police Department and he hands over an old file to McIntyre. 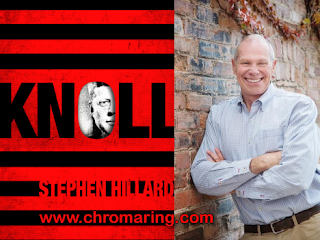 It is a personal file of his father Dean McIntyre, in the final pages he had hand-written a para which reads "For what I did in Dallas, they will find me. Carlos Marcello, his lapdog Mike Maroon. That prick Louie".

Without knowing the consequences McIntyre goes in search for the truth. Banner McCoy, Ex-NSA, fugitive spy, author of spyflow.com, whose project at TCC was called KNOLL, a project to utilize all available resources to gather evidence and resolve questions regarding the assassination of JFK. But in truth it is to destroy any remaining evidence of the conspiracy. These two character tales goes side by side.

What happens to them is the remaining part of the story? The author has well written the difficulties and sufferings of McIntyre's ordeal and an unexpected help from his guardian angel at the end makes this a good read.

At first I was unable to grasp the flow and had a hard time to understand McIntyre and McCoy. The story is told in first person account by McIntyre and Banner McCoy and shifts to third person when it comes to Calagero Minacore aka Carlos Marcello and his one time associate Louie Diamond. The climax and ending are super fast with vivid presentation it looked like watching a movie.

Like myself this book is recommended to JFK conspiracy theory buffs. The book as much information about a white Chevy, radio recording and a aerial photo taken before Kennedy assassination.

I received this copy from Net galley and I thank net galley and FSB Associates, LLC for giving me a chance to read and review this novel.
Posted by Roop
Email ThisBlogThis!Share to TwitterShare to FacebookShare to Pinterest
Labels: grassy knoll, JFK, knoll, stephen hillard, thriller