I requested for a copy of a graphic novel, The Baker Street Four Volume 1 in Net galley. I thank Net galley and Insight editions for fulfilling my wish.

The graphic novel "The Baker Street Four" is about the adventures of Sherlock Holmes unofficial force called Baker Street Irregulars. The book has two stories one is "The Blue Curtain" and the second is "The Rabukin Case". 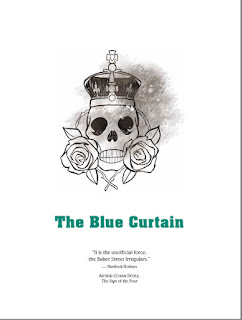 Chubby Charlie, acrobatic and energetic Tom, Billy and a feline are the Baker street irregulars. Tom's girlfriend Betty is kidnapped in front of his eyes. Tom along with his friends reach Door No.221B to find out that their master Sherlock Holmes has gone to crack a case in Surrey. Tom had glanced at the kidnapper who had a unique tattoo on his hand that of crowned skull with two roses. As they are tutored by Holmes they start to investigate. Did they save Betty? 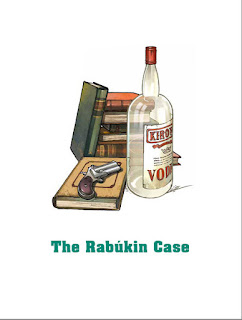 The story involves one of the Russian refugee an idealist Viktor Rabukin falsely arrested for killing O' Sally and believed to be new Jack The Ripper. His lover Katya Ivanova try to get the help of Sherlock Holmes on the way she was to be killed by some Russians but the timely intervention by our irregulars saves Katya. She comes to know that Sherlock has left for Austria in search for a stolen Stradivarius. Katya narrates her story that they are from Saint Petersburg, Russia and they are supporters of Socialist revolution. Like others they tried to escape from the clutches of Okhrana (The Russian Tsarist secret police) and stayed some time in France but Okhrana was behind them so they came to London, here Viktor gave speeches about the prospect of planning a future Russian revolution from England. Two days later Viktor was taken into custody as evidence of murder found in the attic room.

After hearing the sad story and their love of murdered O' Sally they convince Katya that they will investigate as they are assistants to Sherlock Holmes.

Did they find out who the real culprit in planting the evidence in Viktor's attic room? Did they found who is the real new Jack the ripper? all are answered in the remaining pages of the novel.

Sample images from the graphic novel The Baker Street Four 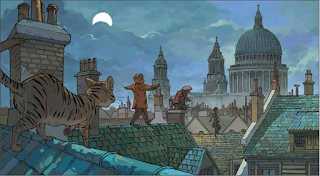 First I have to mention the artwork, it is rich in exhibiting Victorian era buildings, costumes, horse carriages etc. The action scenes are awesome, the acrobatic stunts of Tom are nicely done. The panels are breathtaking and the plot line is good. The characters Tom and Billy make fun of each other which often ends in fisticuffs but their friendship and mutual understanding never gets affected. Charlie is a girl, on advice of Holmes she disguises as a boy. The cat a small character often seen with them helps the three in dire situations. I loved these characters and awaiting to see their next adventure.
Posted by Roop
Email ThisBlogThis!Share to TwitterShare to FacebookShare to Pinterest
Labels: baker street four, graphich novel, netgalley, sherlock holmes