I thank Net galley for giving me an opportunity to read and review William Westbrook's novel "The Bermuda Privateer". 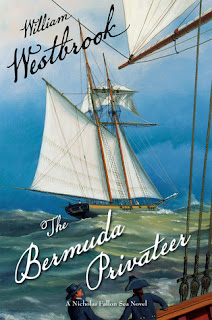 From the blurb:
1796 Captain of the fast, beautiful, and deadly Bermuda schooner Sea Dog, Nicholas Fallon sails the Caribbean protecting Ezra Somer's lucrative salt business and battling Britain's enemies with his best friend and first mate, Beauty McFarland. Somer's daughter, Elinore, is Fallon's' lover. So when Somers offers Fallon a share of the business for capturing Wicked Jak Clayton the pirate who has been stealing his ships – Fallon is motivated to help. Sea Dog soon faces warships, treasure ships, an incompetent Royal Navy captain and a massive hurricane. Along the way Fallon learns about courage, sacrifice and friendship. Ezra Somer's had connived a letter of marque from the British Admiralty for Sea Dog to raid, plunder and otherwise disrupt and destroy Great Britain's enemies.

The novel is fast paced and the author's thorough knowledge of the Caribbean islands  is made into good use for the backdrop of the plot. My first book reading experience with pirate themed started from Rafael Sabatini's Captain Blood and this book did not disappoint me.

Below are couple of characters I like to mention.

(1)Nicholas Fallon the hero of the novel, spent most of his life in ship who started as a ship boy and became the Captain of schooner Sea Dog. His skills in mathematics and cleverness in general made him a natural navigator and much respected by the crew. A born leader, whose thoughts are always about the safety of his crews. A lovable character, patriotic, obedient and truthful to his employer.

(2)Beauty McFarland, Fallon's ship mate and boyhood friend, she is courageous, a statistician, helpful to Fallon in his adventures.

(3) Ezra Somer the owner of salt company, aged and best in shooting, helped Fallon in his fight against the much feared wicked Jak Clayton. Has the heart to accept the mistakes he had done.

(5)Ajani, a teenage guy saved by Fallon, a victim of slavery and Jak Clayton. His special abilities is his nocturnal explorations. His expertise saves Fallon and his crew from death from Jak Clayton's island and later who comes to know about a trial through his friends, a slave trial to Savannah.

(6) Alvaron, Captain of Spanish ship, though his part is small compared with other 5 characters but stands above all. He is one of the captain of the ship, transferring gold and silver to be handed over to France. While transporting the treasure from Spanish Florida to France, he meets with Fallon who is now under the Royal Navy to attack and stop the transfer. Both the ships collide and reaches the shore, Alvaron gravely wounded. Though an enemy Fallon helps him with his own surgeon. Recuperating Alvaron comes to know that his country is giving away that much treasure to France, he joins hands with Fallon.

(7) The schooner Sea Dog, a ship captained by Nicholas Fallon, the fastest ship and threat to pirates.

I liked the part of Fallon and his crew escape from the clutches of Jak Clayton's island. The chapters dealing with the escape of Fallon and Alvaron crews via the slave trial to Savannah. The chapters about the encounter of Sea Dog with Spanish flotilla. The change of mind of Ezra Somers for his salt trade and slavery.

Death is preferable to living without honour. (Fallon's answer to Jak Clayton)

We only make the war that our governments decree.