In early part of 1950's Dr.John Vetterly, a microbiologist, chemically created an artificial form of life that in turn was capable of producing a disease strain that was nondetectable, unidentifiable bacteriological agent able to incapacitate a living thing within seconds of exposure and disrupt the vital body functions, causing death within three to five minutes it was named quick death shortly QD. Admiral Bass was given the task to dump the remaining 36 stainless steel canisters of QD in Rongelo from Buckley Field. Major Vylander commanded the Air Force Boeing C-97, number 75403, a Stratocruiser named Vixen 03. The plane did not reach the destination and his whereabouts was not known. 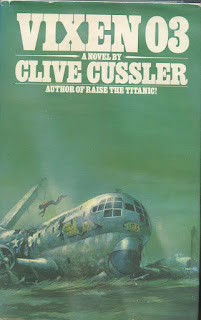 
Our hero Dirk Pitt is on a vacation with his lover Loren Smith, a Congresswoman. In her father's garage he finds a part of plane wreckage, out of curiosity Pitt tries to find out where the wreckage came from. Through proper channels he contacts Colonel Abe Steiger and by chance Pitt understands that the plane should have crash landed in the nearby lake. With help from his sidekick Al, Pitt finds out the remains of Vixen 03. The report of Vixen 03 did not stir the Government and through Pitt's friend FBI agent Paul Buckner he gets information and pays a visit to retired Admiral Bass in his inn. Bass did not believe first and then together they bring up Vixen 03. But 8 canisters are missing from the lot, Bass gets ill and was hospitalized with much difficultly Pitt gets the background of Vixen 03 and the canisters.


The story moves to South Africa where internal problems was at its peak. The AAR (African Army of Revolution) headed by Hiram Lusana and assisted by Machita was gaining attraction from local people, the people look at Lusana as a messiah. To eradicate his popularity and AAR the minority whites hatches a plan, disguising as AAR and attacking white people and their farm. On one such operation navy retired Fawkes family is killed and his farm burned. Some of the officials in South African government convinces Fawkes that Lusana and his men are responsible. (This South African part drags as there is no Dirk Pitt action for a very long time.) They create one master plan "Operation Wild Rose".


Hiram Lusana comes to US to get some support from Congress, after his meeting with Congressman Daggat he was kidnapped by someone.

The South African story at first looked strange and it made me feel what this has to do with the story, Clive Cussler's knack of storytelling is again become evident when he pieces them together in the end. The climax is faster and kept me at the edge. Pitt has shared more action with Abe Steiger, Sandecker and Al Giordino. The chances of finding the person behind stealing the canisters looked bleak for me but that is real twist in the story, as Pitt did some deductions like Sherlock Holmes.

The characterization and back stories of Hiram Lusana, Felicia and Fawkes are very well done. Lusana and Fawkes are opposing characters, we know that Lusana is not behind the slaughter of Fawkes family, in climax without knowing the truth both die for their cause.

I already mentioned author Clive Cussler has a bit of answering our own questions arising from story, one such appears when Admiral Bass tells them that QD is killed when in immersed in water, in our mind we also ask, then let the QD be in the lake bottom forever. That question features by way of Al Giordino, Al cuts in and says if water kills this QD stuff, why don't we simply leave it on the bottom of the lake? Bass shook his head solemnly. No thank you. If you found it, so can someone else.

Below are some one liners of Dirk Pitt.

(1) Pitt and Mapes when entering the weapons storage room.
Mapes slowed his Rolls-Royce convertible and lifted both hands from the steering wheel in an apparent greeting. The guard nodded and waved to his partner, who pulled open the gate from the inside.

I assume that was a signal of some kind, said Pitt.

The hands in the air routine.

An yes, Mapes said. If you had been holding a concealed gun on me, my hands would have remained on the wheel. A normal gesture. Then, as we were waves through and your attention was lulled by the guard's opening the gate, his teammate would have discreetly stepped behind the car and blown your head off.

I am glad you remembered to raise your hands.

(2) Pitt getting angry when Mapes was not able to account for the missing canisters.

How many men did your merchandise kill and maim last year, and the year before that?

If one of those gas shells went off you'd be responsible for perhaps millions of deaths.

(3) After saving Loren Smith from blackmailing.

What's that for? he asked, grinning with pleasure. A reward for bailing me out of a nasty situation. Pitt to the rescue. I always was a pushover for congresswomen in distress…

Women should be able to stand alone. He put his arm around her and led her to his car. There are times when even a dedicated feminist needs a chauvinist to lean on.

(5) Inside the battleship Pitt meeting Lusana who is tied.

I take it you lost the ship's popularity contest...

The dark form behind the light moved closer and Lusana felt his bonds being loosened. Where are you taking me?

Nowhere. But if you value social security in your old age, I suggest you get the hell off this boat before it's blown to pieces.

Who are you?
Not that it matters, the name's Pitt.
Are you part of Captain Fawke's crew?
No, I am free-lance. (typical Pitt one liner)

(6) Pitt and De Vall before the Fawkes family cemetery.

Why are you doing this? De Vall said savagely, What do you hope to gain?
I don't like to see traitors prosper. Pitt retorted.