I like to thank Net galley for providing me a copy for review. 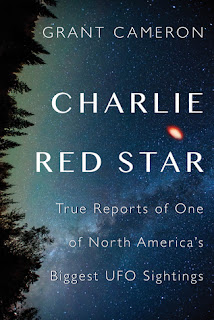 I strongly believe we are not alone in the universe. Twenty years back, evening time, my family use to lie on the terrace and watch the sky and we often see a small ball of light moving from north to south. Sometimes couple of lights trying to overtake. The lights won't blink and we told this to our friends and relatives, they did not believe us.

Coming back to the book, it is about recounting of Grant Cameron work on investigating the numerous unidentified flying object sightings that occurred in the Canadian province of Manitoba in the year 1975-76. The major portion of this book is retelling of the many tales told by citizens involved in the sightings. Charlie Red Star is name given to the glowing, pulsating disk shaped UFO.

The tales are vividly explained and exhaustive. Sometimes recounting feels a drag and the author has tried to change the flow by placing diagrams and photos.

Not only the author had given the records of sightings alone but also given elaborate information of how animals behaved during the appearance of Charlie Red Star, recording the sound and testing the wave pattern. People who become obsessed tried to capture the image of the flying saucer, but only one Tanis Major captured photographs are the best. Even the speed of the UFO is given. The author also raises several questions, what if these unidentified lights belong to alien technology? If the aliens wish to remain hidden, why do they place lights around their craft for all to see? Are they afraid of a mid air collision? Are these lights indicators that they want to land at our airports?

According to the story it appears that not only one UFO was involved, but commonly many had experienced watching Charlie Red Star.

In the end the author has given exhaustive detailed notes in chapter wise. I enjoyed reading the book and I recommend this to UFO buffs and conspiracy theorist.


I like to quote the last line of the book.

" Reliving old memories and dreams of the past. When he hunts through the night, we won't question why. Good Night, Charlie Red Star - Old Chief of the Sky".
Posted by Roop
Email ThisBlogThis!Share to TwitterShare to FacebookShare to Pinterest
Labels: aliens, canada, charlie redstar, flying saucer, grant cameron, manitoba, net galley, ufo