Clive Cussler the master storyteller, this is yet another feather to his cap. I was awestruck by his skill of interweaving various sub plots in the story. 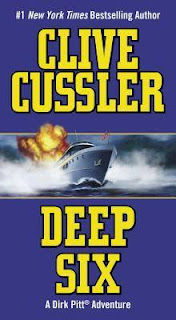 The novel starts in the year 1966, with Arta Casilighio the teller of Beverly-Wilshire bank steals 120000 dollars and hatches a plan to escape from San Francisco to Auckland, New Zealand in a cargo ship, but she was killed by Korean seamen.

Another sub story, in Augustine Island, Alaska a poison leak in sea kills many, the nature of the agent is that it is absorbed through skin which turns out to be a deadly biological weapon, called Nerve Agent S. Years back the nerve agent was to be buried in desert, however some of the containers disappeared.

NUMA is asked to find out the source of the poison. Working along with Dr.Julie Mendoza, Pitt finds out the sunken ship and all the containers of Nerve Agent S. But unexpected eruption of the volcano tilts the ship and accidentally kills Julie.

Through the help of Alhambra Iron and Boiler Company and St. Julien Perlmutter, Pitt comes to know the ship Pilottown name has been changed several times and that the San Marino, the Belle Chasse and the Pilottown are indeed one and the same ship. The ownership points to Bougainville Maritime Lines, ruled by 89 year old Madame Min Koryo Bougainville.

Sub plot number 3, the President of the United States, Vice President Margolin, President Pro Temp-ore Marcus Larimer and Speaker of the House Alan Moran were abducted from Presidential yacht and mind controlled by a psychologist Aleksei Lugovoy in a secret lab, a part of plot of Soviet Union and Min Koryo.

Meanwhile Paul Suvorov a KGB officer misunderstands the mind control plan and tries to release, but he takes only Alan Moran and Marcus Larimer to a Russian cruise ship Leonid Andreyev. There Pitt's love interest Loren Smith who happens to be in the cruiser sees Moran and Larimer, she informs to her secretary.

She notifies Pitt. And Pitt along with Al Giordino disguises as a couples enters the cruise ship, but the ship was detonated many were killed. Pitt, Al and Loren tries to board nearby boat. As Moran and Loren boards, Pitt was attacked by Lee Tong, the grandson of Min Koryo and he takes Loren with him.

The President under mind control returns to White House, rules as a Dictator. The Congress tries to impeach. Pitt not fully recovered through help from Yaeger and Perlmutter finds out the secret lab and tries their best to save the United States, Vice President and Loren Smith.

How he accomplished is told in the final chapters. 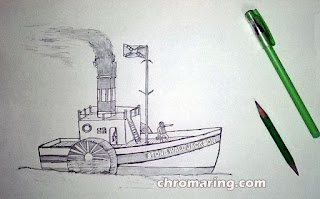 My artwork of Dirk Pitt on board Stonewall Jackson. Pitt attired in turtle neck sweater and holding a violin case.

I like to quote some of Pitt's one liners:

1. What in hell are these? Giordino mumbled, emerging from the cobwebs.

Welcome gifts from the sanitation department. (When hood and gloves given to wear for protection against nerve agent S)

2. Deducing the murderer in an Agatha Christie novel is kindergarten stuff compared to finding a lost derelict under hundreds of square miles of water. Sometimes you get lucky early. Most of the time you don't. (Pitt's poetic response to Dover on finding the shipwreck)

3. No one in the world is immune from curiosity. (Pitt asking to release news about finding of two ship wrecks instead of one)

4. What was that all about? Giordino inquired. My travel agent Pitt answered, pretending to be nonchalant. (Pitt's answer to Loren's Secretary Sally on finding Loren Smith in Leonid Andreyev cruise ship)

5. Y' all play the violin when ya fly? Hogan asked curiously.
Soothes my fear of height, Pitt replied. (Colt Thompson sub machine gun carried by Pitt in a violin case)

6. Nice place you have here, came a voice from the doorway. but your elevator is out of order.

You! he gasped. Pitts face tired, haggard and dark with beard stubble lit up in a smile.

Lee Tong Bougainville. What a coincidence. You're alive!

A trite observation. (Climax dialog between Pitt and Lee Tong)

7. Happen to know Lee Tong Bougainville personally, said Emmett. He is a respected business executive who donates heavily to political campaigns. So does the Mafia and every charlatan who's out to milk the government money machine, said Pitt icily.

8. Why have you pursued my grandmother and me, Mr.Pitt? he demanded, stalling. Why have you set out to wreck Bougainville Maritime?

That's like Hitler asked why the Allies invaded Europe. In my case, you were responsible for the death of a friend.

9. Sal Casio? she asked. With his daughter. And Min Koryo Bougainville? In hell. (Pitt answers to Loren in the end)

A penthouse suite, he corrected her. And who's going to pay for this opulent interlude? Pitt looked down at her in mock astonishment. Why the government, of course. Who else? (Pitt answers to Loren in the end)
Posted by Roop
Email ThisBlogThis!Share to TwitterShare to FacebookShare to Pinterest
Labels: clive cussler, deep six, dirk pitt