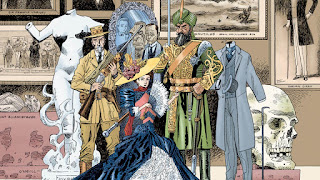 
The year is 1898, the Empire is under threat, upon the orders of mysterious "M" Campion Bond recruits Mina Murray and Captain Nemo to find Allan Quatermain who is addicted to opium and lives pathetically in Morocco. Both Nemo and Murray retrieve Allan from the opium den. Then they round up Dr.Henry Jekyll (Mr.Edward Hyde equivalent to Hulk), Hawley Griffin (Invisible man, I liked his part), these five rather six including Jekyll's alter ego Hyde all comprise "The League of Extraordinary Gentleman". 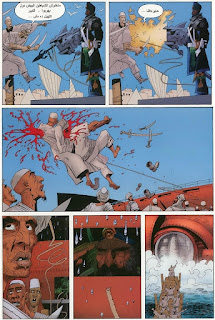 The empire is planning a lunar expedition before the dawn of 19th Century, but the anti gravity material 'cavorite' was stolen by a warlord from orient known by name as Doctor who has established himself as the crime king of London's East End. With Nautilus submarine the league members infiltrate and capture the cavorite and hands it to Campion Bond, but their superior "M' has another plan to bombard East End. Did the league members stop the atrocious act of 'M'? And who is this mysterious "M" are all answered in the remaining panels.
The art work is good the panels are explicit with violence and bloodshed. Some might not like the gory parts detailed in such a manner. The story is awesome and entertaining with adding backstories for some characters.