Nostradamus: A Life From Beginning to End

“I will be seated at night in my secret study,
Alone, sitting upon a stool of brass;
A flame shall leap forth from the solitude,
Granting that which is not believed to be in vain.”
—Nostradamus


The book is concise and well written about the life of Michel de Nostredame, better known via the Latin form Nostradamus. He was born on December 14th 1503 in a small commune called Saint-Remy-de-Provence in the south of France. Nostradamus grandfather was a decisive force in his life. He studied medicine at the age of 14. Married to Henriette d’Encausse and had two children. 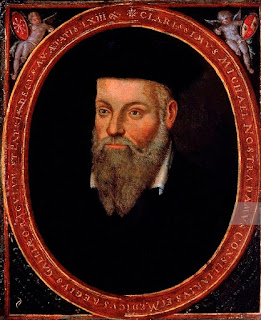 When the plague swept Europe, though Nostradamus was a physician he was not able to save his wife and children. After that he wandered over France. Later he settled and started his profession along with his study in occult.

In the year 1547, he settled in Salon-de-Provence, there he married a rich widow Anne Ponsarde, she give birth to six  children. Nostradamus moved away from his medical profession and took up occult science. He published almanac which became a hit and he become famous. Even the Queen of France Catherine de' Medici consulted him and later appointed him as Counsellor.

After publishing 11 almanacs Nostradamus wrote the famous Century  it had over 1200 quatrains, unfortunately only 946 of them remain today. At that time people like him are termed heretics and Inquisition prevailed. Nostradamus cleverly wrote the quatrains which would include not only the true languages of the old Masters— Latin and Greek— but also Italian and even a dialect from the Provence area of France which was unique to the region.

The author has written neutrally about Nostradamus prophecies. And he has made clear that we have to decide by our own wisdom.