The Ghost Who Died Twice

A different story from the Phantom, every time a new Phantom takes up his position either the old Phantom is in death bed or mortally wounded. But this story starts when Guran asks the Ghost who walks why that 11th phantom took over in 1757 when 10th Phantom was still alive and the death of the 10th Phantom was in 1758. 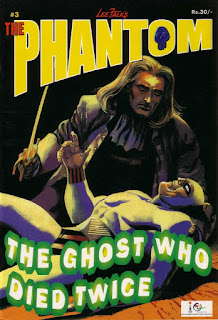 The Ghost who walks enters the chronicle room to know about the story. The year was 1757 when Marianne and her son Chris (11th Phantom) were returning from France to Denkali on board Ile De France. But the Singh brotherhood headed by Ashar and his pirates surrounds the Ile De France and tries to kill Chris, the Phantom intervenes and both Phantom and Ashar take up their sword to settle. The cunning Ashar fires two shots on Phantom subsequently the Bandars and Muri tribe enters the ship and the pirates are overwhelmed. They escape, the tribes people takes the wounded Phantom and his son to the skull cave. 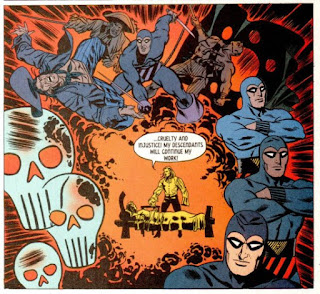 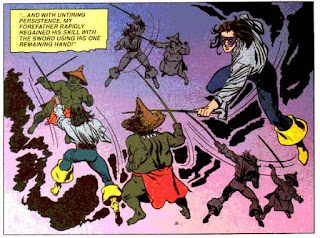 Did the 10th Phantom took revenge over Ashar? and how did the Phantom died are all revealed in the remaining pages on the comic book.

Phantom uses a different mask after he recuperates and Phantom undergoing vigorous training to get his health back made me thought of Rocky movie.

The artwork is excellent with a good story line and enjoyable read for Phans (short for Phantom fans).
Posted by Roop
Email ThisBlogThis!Share to TwitterShare to FacebookShare to Pinterest
Labels: ghost who walks, lee falk, phantom, pirates, singh brotherhood