The Phantom - The Treasure Of The Skull Cave

The comic book I read is 70s reprint, the library book has missing cover art. I liked the story as it re-created the Phantom myth and beautiful one liners. 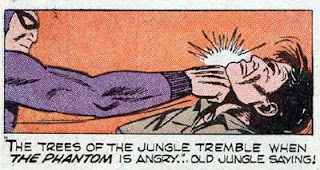 The story opens with the introduction of Cappy Swargo and Pirate Pete. Soon their adventure lead to one common place "JAIL". In their next cell Llongo tribesman Buba was imprisoned. Over hearing their talk about treasures and treasure hunt, Buba tells them about the legend of treasures of the skull cave. At first they did not believe later Buba's tells them that he was the fan bearer for his uncle, he accompanied him to the skull cave and was a witness. He further tells them that to reach the treasure they have to cross the jungle and enter the Deep Woods, evade the poison people and most importantly the Phantom.

The next day on the way to the trail Cappy Swargo arranges his friends for the escapade. After their escape they meet his influential friend 'The General". He explains the treasure to the General who had dire need of funds for the revolution. The General finances for the expedition to the deep woods. They plan to gas the tribe & Phantom and loot the treasure. 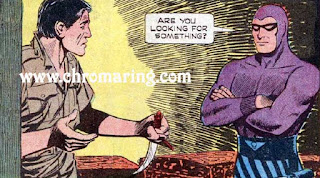 A larger part of the team waits near the dead volcano as Cappy Swargo and Buba venture into the deep woods. After a week journey they find the skull cave, Cappy Swargo asks Buba to hide the poisonous gas bomb and wait for his signal. Cappy acts that he was lost in the jungle as the Bandar tribe takes him to Phantom. The Ghost who walks is very clever and he ascertains that Cappy is acting. Later that night Phantom gives Cappy a guided tour to his major treasure room.

Did Cappy Swargo and Buba accomplished the mission? What happened to The General in the end are all answered in the remaining pages of the book.

A superb story line with cunning characters and enjoyable read. I finished the comic book within 30 minutes but took me 2 hours to write a review!