Code Name Barracuda first English edition was released in 1967 January. In Tamil Nadu Barracuda and his accomplice Frollo is known as CID Lawrence and David. The adventure of Lawrence and David was a super hit in our Country. Aged 35+ will remember the adventure stories titled Flight 731 (Payment in Death), Manjal Poo Marmam (The Evil Ones) the mega hit stories mesmerized most of us. 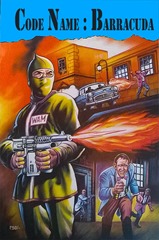 The story starts in Guild Hall, London as Scotland Yard conducts a farewell party to their Chief Of Crime Department, who is been assigned to work in UN Spy Force, our Heroes Barracuda and Frollo were also present. The doubting Thomas Frollo was very keen in watching the Chief as he suspects that the agents from WAM (War Against Mankind) might try to assassinate him. A bearer stabs the Chief from behind and runs off from the Guild Hall, as Barracuda and Frollo chases him. Before they grab him the bearer dies suddenly. The autopsy reveals that the person died of Brain haemorrhage. 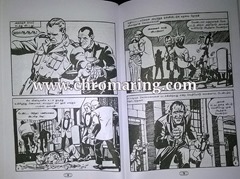 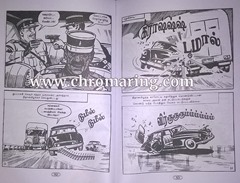 Barracuda is asked to safe guard another officer from FBI, Edgar Glendale who is also assigned to work in UN forces. They travel with him in BOAC Cunard flight to New York. On the way as expected the duo stops the assassination attempt by an air hostess and she also dies instantly. The mystery thickens and the x rays of victim shows a device planted inside the brain. Help from the technical people, the mystery was solved that the transmitter has two triggers one to give command to kill and another triggers the transmitter to explode and kill the assassin. 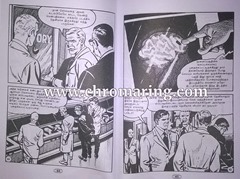 To capture the agents of WAM a foul proof plan was made. Did they find out how WAM make innocents to become assassins? Did they find out the secret lab of WAM? all these are answered in the remaining pages of the book.