Another Indrajal comics that I read. This time, Phantom saves a baby gorilla and names him as Buster. Phantom tries his best to send back Buster to his tribe. Unfortunately he cannot find them. 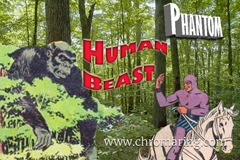 My artwork for the comic

On his long trip to high mountain Phantom leaves baby gorilla to Wambesi tribe. The king orders Tola to look after Buster. But Tola torments Buster and once he sets fire to the cage, Buster is badly burned and scared. Buster escapes and collapses in the jungle. Unable to find the gorilla the King lies to Phantom that Buster had died by a mysterious illness.

Buster pokes fainted Phantom as Devil and Hero looks on.

Baby gorilla at last finds his tribe but they rejects him, Buster becomes lonely tortured by humans and rejected by his own kind. Years rolls on, Buster becomes adult gorilla and he destroys many villages. His legend grows and the tribe people name him as the old baldy. As they cannot control Buster they ask the help of Phantom.

How did Phantom tames Buster? what happens to Buster in the end is all beautifully given in the book.

The panels by Sy Barry and story is by legendary Lee Falk an enjoyable read.