There are many stories related with the Jungle Patrol. And this comic book “The Mysterious Bank Robbery” is one such. In the year 1664, the 6th Phantom who subdued pirates such as Redbeard asks their help to form an organization to fight piracy, they willingly consent to Phantom’s plan and Redbeard becomes the first Colonel of the Jungle Patrol. Later the Phantom becomes the mysterious Unknown Commander of Jungle patrol. 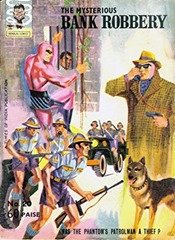 In this comic book one jungle patrol recruit private Brown did not believes that there is an unknown Commander and enters the Commander’s room with his friend to see who the real commander is.

But Phantom who use to visit the office from a condemned well writes the orders to punish the two privates. Brown visits a bar and he was drugged by underworld thugs. They uses his Jungle Patrol uniform and steals money from the bank. After their work they leave the false mustache inside uniform.

The news of Bank robbery reaches the Colonel of Jungle Patrol and he orders all the recruits to tell their whereabouts. Brown tells him that he did not know what happened and he shows the false mustache. The Bank Manager identifies Brown with mustache as one of the robbers.

Phantom visits the jail and comes to know that Brown is telling the truth. How did Phantom manage to find the real robbers, upheld the justice and the prestige of Jungle Patrol remains the other half of the story.

Nobody will complain the story of Lee Falk. I enjoyed reading the book.