Ali on Ali: Why He Said What He Said When He Said It

Muhammad Ali is one of my favourite sports person. My father used to say about Ali’s boxing talent to me. Muhammad Ali paid a visit to India in January 1980, and he stayed in Chennai and did an exhibition bout in old Nehru Stadium arranged by Tamil Nadu Amateur Boxing Association and a private sponsor Apeejay group. He did a fight with former heavy weight champion Jimmy Ellis. The function was presided by the Chief Minister of Tamil Nadu MGR, who is a sport enthusiast. Below are two images from the exhibition bout. 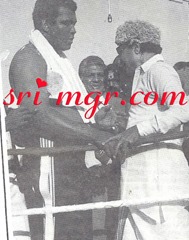 Image in the left the then Tamil Nadu Chief Minister and darling of the masses MGR (fur cap and black glasses) holding hands with King of Boxing Muhammad Ali and Jimmy Ellis. To the right MGR congratulating Ali after the fight.  An info both MGR and Muhammad Ali share the same birthday. Below image of MGR who acted as a boxer in Kavalkaran (1967).  Images and  post is from my another blog srimgr.com 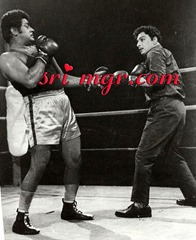 I liked the book so much and I strongly recommend every Muhammad Ali fans should have. And I came to know that Ali also wrote some poem. The book has beautiful photos of Ali in the ring and some with his family & friends. 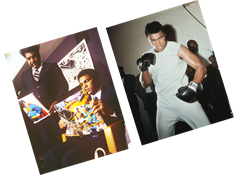 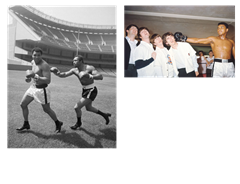 The book is full of quotes of Ali. The writer has given brief description for each quote when it was said and for whom. Most of his quotes are hilarious some are thought provoking. My most liked quotes of Ali is given below.

1. If you even dream of beating me you'd better wake up and apologize.

2. I understand you have a queen of England but you don't have a king.

3. I ain't Superman. If the fans think I can do everything I say I can do then they're crazier than I am.

4. The man who will whup me will be fast strong, and hasn't been born yet.

5. I hated every minute of training. But I said, Don't Quit. Suffer now, and live the rest of your life as a champion.


And my most favourite one is the 7th quote.