Yet another fast paced thriller from the Grand master of Adventure Clive Cussler. This is my first reading of NUMA Files. I am a fan of Dirk Pitt, when my hero is also in the story my joy doubled. 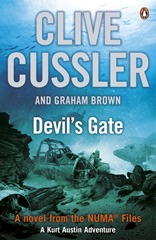 A Japanese cargo ship cruises the eastern Atlantic near the Azores - when it bursts into flames. A gang of pirates speeds to take advantage of the disaster – but their boat explodes. What on earth is happening? What does it have to do with the kidnapping of a top scientist from the streets of Geneva. With the defection sixty years ago of a mysterious Russian? With the discovery of an extraordinary underwater graveyard of ships and planes littered across the sea floor? As Austin and Zavala and the rest of team rush to investigate, they find themselves drawn into the extraordinary ambitions of an African dictator, the creation of a weapon of almost mythical power, and an unimaginably audacious plan to extort the world's major nations. The penalty for refusal? The destruction of the world's greatest cities. Starting with Washington, DC . . . Filled with the high-stakes suspense and boundless invention that are unique to Cussler, Devils Gate is one of the most thrilling novels yet from the grand master of adventure.

The novel has superb plots with awesome characters like Paul, Gamay, Katarina Luskaya, Andras, Alexander Cochrane and Djemma Garand.  With lot of action from Kurt Austin and Joe Zavala, I like to write about Kurt’s action scenes, first thing comes to my mind is Joe and Kurt trying their best to escape from their adversaries in the submersible Barracuda, Kurt using an old oxygen tank to save Joe, rescuing Kristi Nordegrun from the sinking Kinjara Maru and finally Kurt Austin using the “Single Occupant Tactical Insertion Unit” or a one man glider which can transport its occupant a one way trip across 140 miles and doing it without a sound or heat trail or radar signature, landing on the mysterious tanker called Onyx. The tanker which has the capacity to relay the death rays to Washington DC. “One man on a tanker in the middle of the Atlantic now held the fate of thousands, if not hundreds of thousands, in his (Kurt Austin) hands. A sentence giving hope that he will take care of Andras and save the country. A fitting climax to the story. Clive’s co author Graham Brown had excellently handled the plots.

I also like to quote the character of Kurt “and to Kurt Austin the sea had always meant freedom; freedom to roam and explore the world, freedom from traffic and smog and the sometimes claustrophobic existence of modern urban life”.

After Dirk Pitt adventures I started to like Kurt Austin and yes I have collected some of Numa files.