Nostradamus hides his prophecy book “Century” in Sahara which contains the remaining 58 quatrains of Century VII. The book also prophecies about the end of human race and it may continue through the effort of one girl who will be a decadent of Nostradamus companion. 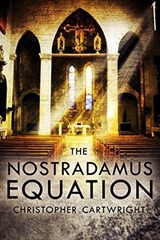 That girl is Dr.Zara Delacroix, but she did not believe in Nostradamus writings. Later when she finds the hidden book she start to believe in his prophecies.  To stop her progress a group of rebels try to kill and take the book. Zara escapes from them and meets Sam Reilly. Now the story shifts to 4th gear. On one side Zara been chased by the thugs of General Ngige and another she has doubts about Sam and his appearance in the middle of the desert. To fill up their water bottle, they happen to use the fossil water from foggara (ancient under water tunnel dug up by Garamantes) but they cannot come up from the well as the thugs were above looking for them. They stay in the under water tunnel for days and they attempt to find another route for escape, this part of the story was very thrilling as Sam, Tom and Zara try their level best to come out of the tunnel.

Same time Sam’s team understands that he had been gone missing and they begin to search for him. Did Sam, Tom Bower and Zara escape from the tunnel? What was the prophecy of Nostradamus and what is Nostradamus equation? Did General Ngige become the Dictator of all of Africa? What mineral was General Ngige was mining below Lake Tumba? all these are answered in the last few pages of the novel. The climax is cliff hanger.