Review: Eye of the Storm

Eye of the Storm by Jack Higgins
My rating: 4 of 5 stars

Another superb thriller by Jack Higgins. The author has created alternate history involving bombing of No.10, Downing Street. A cat and mouse game between Sean Dillion and Martin Brosnan and cameo of Liam Devlin.

I thoroughly enjoyed reading this book.

One Day Wonders by Sunil Gavaskar
My rating: 5 of 5 stars

A superb book on the Benson and Hedges World Cup 1985 held in Australia and Rothmans Cup in Sharjah. A detailed account from the Ace opener Sunil Gavaskar on his captainship, Indian batting and bowling especially Srikanth, Kapildev and spin legend Sivaramakrishnan.

A must book for cricket fans.

Sita - Tamil by Amish Tripathi
My rating: 3 of 5 stars

My brother told me about Amish Tripathi and the books he had written. Keeping that in mind I choose the book 2 of The Ram Chandra series. The characterisation and the management of Lord Ram explained by my teacher Mathi Srinivasan in my college days also piqued my interest to read this book. But I was very much disappointed that Sita is depicted as a warrior and the adventures of her look like water down version of Lara Croft - Tomb Raider.

In the story, Hanuman teaches Sita about martial arts! Hanuman has been known to her before Lankan episode looks ridiculous enough that made me stop reading the book.

Charles Allen one of the great chroniclers of India, a traveller, and a historian his book Ashoka The Search for India's Lost Emperor is a discovery of the Great Indian King who patronised Buddhism and showed religious tolerance.

The above book has 16 chapters, The Breaking of Idols, The Golden Column of Firoz Shah, Objects of Enquiry, Enter Alexander, Furious Orientalists, The Long Shadow of Horace Hayman Wilson, Prinsep's Ghat, Thus Spake King Piyadasi, Brian Hodgson's Gift, Records of the Western Regions, Alexander Cunningham the Great, Sir Alexander is Excelsis, Corpus Inscriptionum Indicarum, India after Cunningham, Ashoka in the Twentieth Century and The Rise and Fall of Ashokadharma.

This book is not about the life history of Ashoka, as many may feel, it is about how the great king and his work once again brought to the general public.

The entrance of British colonial rule in India paved the way in finding out the lost and forgotten period of ancient India. The laborious work carried out by John Marshall (1670), Jesuit priest Joseph Tiefenthaler (during the 1750s), jurist, scholar, philologist and a child prodigy able to speak fluently in thirteen languages William 'Oriental' Jones (1770s), James Prinsep (1830s) followed by Alexander Cunningham and John Marshall the man behind the discovery of Indus Valley Civilization and finally the Asiatic Society re-discovered Ashoka.

Not only the above mentioned the early writings such as Vishnu Purana, Mahavamsa and the travel accounts of Xuangzang helped to shed light on the subject. 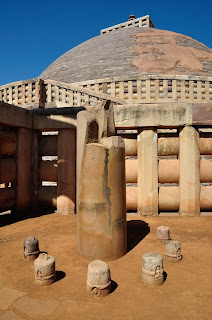 The book further delves into how the Brahmi script was deciphered, the findings of Rock Edicts, Pillar Edicts and stupas. The author also gives us the facts about the burning down the Buddhist library by a warlord Muhammed Bakhtiyar, removal of the golden pillar by Firoz Shah, the brahmans who tried to suppress the records and some kings after the Mauryan dynasty defaced most of the structures erected by King Ashoka. 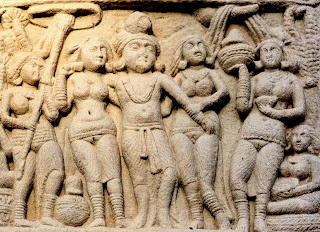 The above image shows King Ashoka faints on seeing the condition of Bodhi Tree. Click the above image to enlarge. The images are from Wikipedia.

The Rock and Pillar edicts of King Ashoka is given as an appendix. The narration in the book takes us to the 3rd century BCE, for the past one month I have been living in that century, enjoying every page of the book. A collectors edition for history buffs especially Indian history.
Posted by Roop No comments:
Email ThisBlogThis!Share to TwitterShare to FacebookShare to Pinterest
Labels: ancient indian history, ashoka, bharhut, charles allen, history, indian emperor, pillar edicts, rock edicts, sanchi, saranath
Newer Posts Older Posts Home
Subscribe to: Posts (Atom)
Roopkumar Balachandran's books on Goodreads