Copperhead - adventure, drama, secret, even a dash of romance.

I thank Net Galley and Europe Comics for providing me with a copy for review. The graphic novel Operation Copperhead Chapter 1 is by Jean Harambat who is the author and also the Illustrator. The story is that a girl serving tea in the set of Death on the Nile, asks Niven and Ustinov, how long they know each other. And Peter Ustinov tells her that, they were known to each other since Copperhead. And the girl questions them about what is the meaning of Copperhead? Both Niven and Ustinov elaborate the story. 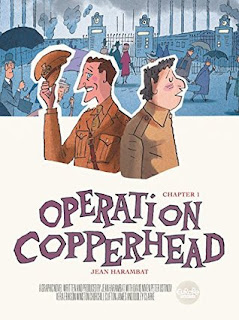 In actual life, Niven and Ustinov served the British Army. Ustinov as private later Batman to Niven, while he was working with Army Film and photographic unit for the morale-building film. Niven had a minor part in the deception operation. The graphic novel is based on this fact of these two actors.

The story is told in flashbacks and the author has intelligently used anecdotes from biographies of Niven (The Moon's a Balloon) and Ustinov (Dear Me), blurring the fiction. Another example is the private talk of Niven with Winston Churchill.

The artwork is not bad in some frames it is outstanding. I had difficulty in reading some frames as the font is thin and narrow.