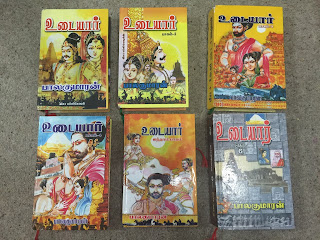 The complete set of Udayar novel.


This book is the first part of the 6 part series of author Balakumaran's magnificent novel "Udayar". It is the story of one of the greatest Indian King Rajaraja Chola's ambition of constructing a Lord Siva Temple (Rajarajesvaram or Peruvudaiyār Kōvil or Brihadishvara Temple) in Thanjavur.

The book elucidates how the temple was constructed amidst the obstacles created by his nemesis the Pandyas and Cheras.

In the first part, the king Rajaraja Chola expresses his wish to construct the biggest temple. His prime minister Bhramarayar and his spiritual mentor Karuvurar help advise him in selecting the place and time for initiating the construction. The book acquaints us how the people of Tamil Nadu lived in the medieval period. The characters are mostly true and some of them were added for the entertainment value.

Eagerly waiting to read the 2nd part of the novel.
Posted by Roop No comments:
Email ThisBlogThis!Share to TwitterShare to FacebookShare to Pinterest
Labels: rajaraja chola, tamil historical novel

Murder Aboard the Flying Scotsman


One blustery day in October of 1924, newlyweds Mr and Mrs Basil Reed travel aboard the recently christened Flying Scotsman, a high-speed steam engine train that travels from London to Edinburgh, for their honeymoon. With only one short stop at York, Ginger anticipates time with her new husband will fly by.

She’s wrong. Something terrible has happened in the Royal Mail carriage, which forces the train to stop dead in its tracks. There’s been a death and Chief Inspector Reed has been asked to investigate.

It’s a uniquely disturbing murder and Ginger and Basil are eager to puzzle it out together. What do the first-class passengers have to do with the dead man? With another crime shortly discovered, Ginger and Basil soon realize they’re not dealing with a run-of-the-mill killer—they’re dealing with a mastermind who’s not done playing with them yet.

Murder and jewel heist, crime on board the Flying Scotsman a captivating read. This is my first reading of the series.
Posted by Roop No comments:
Email ThisBlogThis!Share to TwitterShare to FacebookShare to Pinterest

Anbulla Ethiri by Rajesh Kumar
My rating: 4 of 5 stars