The Stars Of History - Charlie Chaplin is a graphic novel written by Bernard Swysen and illustrated by Bruno Bazile. Thanks to Net Galley for allowing me to review the graphic novel which was given in pdf format. I have reviewed a couple of graphic novels but this one was in high resolution and a delight to read. 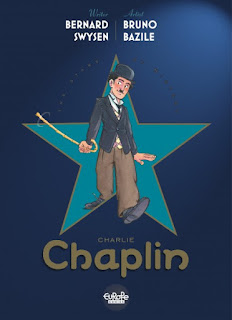 Europe comics had a great idea of introducing celebrities' biographies into graphic novels. I very much appreciate the idea. Charlie grew up in poverty and becomes a celebrity and great comedian of our time. Charlie Chaplin is legendary the graphic novel closely follows his story and gave good illustrations of his career.

First time I shed tears over an illustration, small boy Chaplin hugging his mother as she has lost her mind. Chaplin had spent his childhood in a state of depression. His entry into theatres and into the United States his triumphs in cinema, his celebrity status, his lost love, and how he got ideas for some of his movies are given neatly. I very much enjoyed the book and I strongly recommend this graphic novel.